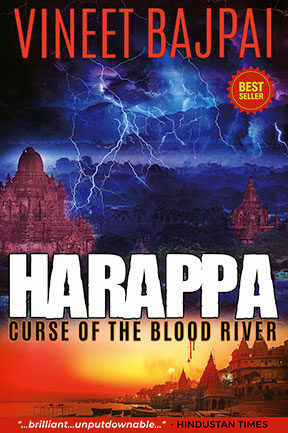 Harappa - Curse Of The Blood River

“Harappa knits 3,700 years, powerful ancient and modern-day characters, and a nail-biting conspiracy – all in one literary thriller.” – Times of India

“Vineet’s style of narrative and backdrop does remind (the reader) of Dan Brown, but Vineet has surpassed him in terms of vision and imagination” – ikreatepassions.com

“Harappa is definitely the next Bahubali…” – Mala Ramakrishnan

“Bajpai sets you up perfectly for the dark revelations…of the great storyline he has created in Harappa.” – thebigfatboho.com

“Harappa…is a mix of history, mythology and fantasy…The story has the visual effect of a screenplay.” – Asian Age

“Lending a true Dan Brown-esque vibe, author Vineet Bajpai weaves a gripping narrative…introduces a myriad elements and yet manages to keep them together…brilliant…unputdownable experience for the reader.” – Hindustan Times